Almost anyone who works in my industry will tell you the same thing: We see the world a little differently than you. For most of us, after a certain number of years in news (and it doesn’t take many), our wiring gets a little messed up. Our humor gets a little darker, our threshold for the unthinkable gets a little higher, and cynicism sinks in.

I write stories about people losing their lives every day. I don’t always stop to think about all the heartache behind these stories, because I simply can’t. But today was different.

Today I watched video of two people being gunned down while they did what many of my dear friends do every day. WDBJ’s Alison Parker and Adam Ward could have been my colleagues. Just a few short years ago, that could have been me.

Even with that realization, and with that chilling video replaying over and over in my head, breaking news mode set in and my focus was on finding information, making graphics, helping my coworkers get the latest on the air.

After seeing that horrible violence, what actually stopped me in my tracks was this: 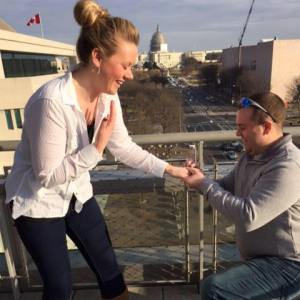 It was the Facebook photo of photographer Adam Ward proposing to his fiance, Melissa Ott, that felt like a punch in the gut, and made my eyes well with tears. As heartbreaking as the shooting video was to see, the juxtaposition of it with this couple’s joy and the promise of their future is almost more painful.

Melissa was a morning producer at WDBJ, and today was her last day before taking a new job in Charlotte. Adam was going to move there with her. Her coworkers had a party planned for later today. One of my colleagues knew Melissa, and showed me her Facebook post from early this morning, saying she was feeling the love from her Channel 7 family on her last day. A short time later, she was in the control room as Adam was shot and killed on her station’s air.

While the videos of the shooting were hard to watch, it’s Melissa who I can’t get out of my mind today (as well as Alison Parker’s boyfriend, Christ Hurst, who’s been posting about moving in with her and their plans to get married.) I keep imagining her excitement for her next chapter, all the love she felt from the people around her, and the future she had mentally mapped out with Adam for years to come. Today was supposed to be Melissa’s day, and in an instant a selfish and cowardly man stole that from her, and stole the entire future she and Adam were planning.

I’ve seen recently with some of my own loved ones that there are moments in life that will change us. They split our lives in half, into a “before” and an “after.” Today’s tragedy is another reminder that we never know when these moments will throw our lives upside down.

I so deeply wish I could reset things to the beautiful “befores” that Melissa Ott and Chris Hurst had taken from them. I pray that there is a small consolation in knowing there is an entire community of journalists grieving with them around the world.