I was born into a family with a serious addiction to Chicago sports. As a kid, I was often startled during Sunday dinners at my grandma’s house when the room erupted for a Bears touchdown. My dad has spent every fall for as long as I can remember fielding constant phone calls from his fantasy football partner. And when he was watching TV, you could bet he was probably taking in a football, basketball or baseball game.

My fandom was decidedly more lukewarm. I wouldn’t go so far as to label myself “fair weather,” but while I wholeheartedly supported every Chicago team–and later, the teams of my alma maters–I rarely watched games, and probably couldn’t list more than a player or two.

That’s why I was surprised by how swept up I got in the Cubs’ post season this year.

Being from the northern suburbs (and my dad’s family from the north side of the city), I always preferred the Cubs to the White Sox. And when I got into college, I started going to Cubs games, probably checking out about one each year. 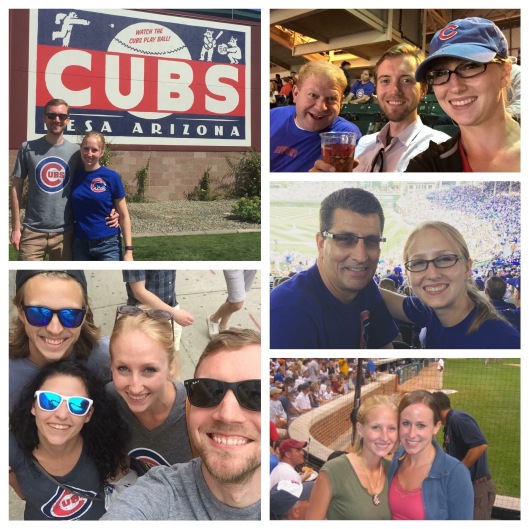 Some of the Cubs games I’ve been to over the past few years.

When I moved back to Chicago to work at a news station last year, it became my job to know more about the team. But it was the fan in me whose hopes soared and then deflated when they were eliminated in the NLCS last year.

Covering the team’s playoff push this year, previewing and recapping every World Series game, was a lot of hard work for my coworkers and me. If they had been eliminated at any point, it would have soon been back to business as usual. But I found myself willing them to win every series, surprised at how strong my lukewarm attachment had become.

Despite the extra stress at work, I noticed over the past few weeks that I was in an exceptional mood. It really wasn’t until now–as I nurse the emotional hangover left in the place of a Cubs-less void–that I realized it was baseball that was keeping me upbeat that whole time. So this is what sports can do to a person, huh?

Of course, it was more than that.

Last Wednesday night, like Cubs fans around the world, I giddily clapped as the Cubs took a four-run lead in Game Seven. I grew silent as their lead grew narrower. I clutched a pillow and felt physically sick to my stomach as the Indians tied things up, and I tried to hold out hope that a World Series win was still in the cards. I clenched my fists through a rain delay and a tenth inning, and when Kris Bryant threw that final out to Anthony Rizzo, I hooted and cheered. I could hear fireworks going off outside, my neighbors screaming with me, passing cars hammering on their horns.

We did it, I thought.

It’s that collective we that’s made the past few weeks so special. I would smile when I saw “W” flags hanging from street lights and front porches. I would wear my Jake Arrieta T-shirt with pride. I would sing along when I heard “Go Cubs Go” on the radio, or even in my own newscast.

At a time in our history when everyone feels so divided and different, the Cubs brought millions of people together. It was easy to feel love for the people around me when it felt like we were all behind this one thing. We had hoped and suffered together for over a hundred years, and finally the thing we believed in had happened. Even me, the lukewarm fan from a sports-loving family.

It struck me as being a lot like life. We all want to succeed, to prove ourselves. Sometimes it takes a really long time, but we push and we persevere, believing our dreams are possible. If you’re lucky, you have a team of fans behind you, believing in you too. You know it’s a universal feeling when even White Sox fans–even Cardinals fans–can be heard saying, “I’m excited for the Cubs.”

My view of thousands of fans lining Michigan Ave. for the Cubs victory parade; Nov. 4, 2016.

I felt that energy as I stood in a crowd of millions Friday, waiting for the Cubs parade to breeze by and give us a glimpse of the team that made it all happen. I started to see this energy going beyond the love for a team and resonating as love for this city. Chicago is usually making headlines for rampant crime and corrupt politicians, so to see all of these people who share a piece of my identity–and embrace it with love–was really moving.

That feeling grew deeper as my boyfriend and I decided to make an impromptu trip to Wrigley Field over the weekend. Days after the Cubs’ World Series win, the streets outside the stadium were as crowded as the hour before a home game. The brick walls around the friendly confines had become a makeshift memorial for all the Cubs fans who passed away before they could see the team take the title, every inch chalked over in names.

I had seen photos and video of the walls on Facebook and in our news coverage, but seeing it in person was something else. I’m sure part of it was knowing there was a brick there with my great aunt’s name on it, thanks to one of my cousins; she was a Cubs fan, and we lost her just two days before that Game Seven win. But beyond that, it was the sense that the excitement and fandom I had seen this year was truly the tip of the iceberg; there was a long history that went deeper than I could imagine. This team, this sport, had been the glue for many friendships and families, passing down that sense of pride and identity, and, if nothing else, creating cherished memories.

I’ve already got a few favorites of my own. And this lukewarm fan can hardly wait for spring training. 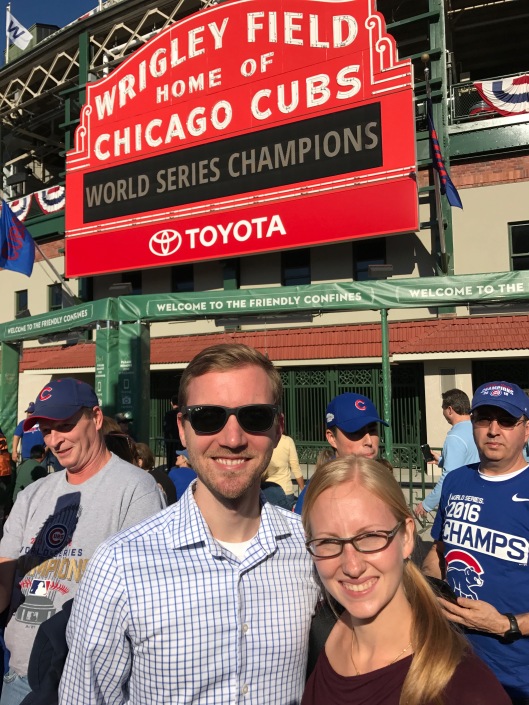