There’s an unfortunate side effect to being born a human: Everyone is part of their own universe, and everything in it revolves around them. Things don’t just happen; they happen “to me.” And sometimes every action someone else takes can feel like a targeted personal affront.

But the reality is, nine times out of ten, the actions and behavior of others have absolutely nothing to do with you. And the ways those actions might affect your life is usually the afterthought of an afterthought.

On a conscious level, we understand that our lives are not the only ones that are chaotic or boring, overwhelming or depressing. We recognize that we’re not the only people facing challenges, even acknowledge that many others have challenges that outrank our own. Yet when conflict arises, the benefit of the doubt goes out the window.

Here’s a crazy thought: Everyone is doing the best they can.

Maybe you see yourself in their shoes and soften a bit. Sometimes I don’t return phone calls. Sometimes I interrupt people. Sometimes I get a little too sarcastic. But I know I’m doing the best I can too. 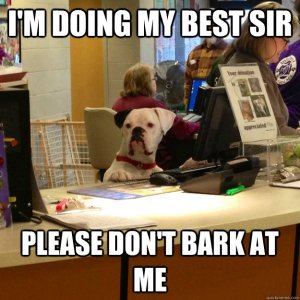 Here’s the M. Night Shyamalan twist to this whole story–Everyone is not actually doing the best they can. Your boss might be a jerk, your mom might be bossy, and the asshole at Starbucks might just be an asshole.

But that doesn’t even matter. Imagine how our everyday lives could be different if we just treated everyone like they were doing the best they can (and honestly, most of them actually are). We’d treat the people around us with much more kindness, and patience. We’d believe in their efforts to treat us kindly in return. Maybe we’d take a second to look around our personal universe, and see we’re not the only one in it.

This single by Fun. came out a couple of years ago, and it never fails to pick up my mood.

There’s something poetic about meeting up with “some friends at the edge of the night.” And the tearful friend telling him, “We are not shining stars,” is just so relatable to me. (“This I know. I never said we are.” So matter of fact.)

But for this one, the chorus itself is simple enough to inspire me out of a gray mood.

If you’re lost and alone
Or you’re sinking like a stone.
Carry on.
May your past be the sound
Of your feet upon the ground.
Carry on.

As someone who makes a habit of getting a little too caught up in the past, I love the idea of my past being the sound of my feet upon the ground. It’s just so true to life. No matter what happens to us and how it makes us feel–distraught, overwhelmed, overjoyed, irate–time marches on and takes us with it. Before you know it, it’s all fading in the rearview mirror and new challenges are coming ahead.

Okay so this might not be a feel-good post for the subjects of this video, but it was definitely a feel-good moment for me–the video had me laughing all morning.

At this point, you don’t have to be a parent to say another Elsa sighting is one too many, or that you might lose it the next time you see a “Frozen” lip sync on YouTube.

I can definitely understand the sentiment, but now that Frozen fever is dying down just a tad, I can finally appreciate the message. So instead of swearing off that song, I made it my mantra.

Sure, there are a lot of lyrics in the song that I like–something about testing limits, and that whole part about how distance makes it all seem small. But it’s really the title that gets it done, with three simple words: Let. It. Go.

I encourage everyone to try this for just a couple of days. You know that old adage about how life is 20 percent what happens to you and 80 percent how you react to it? I’ve learned it’s absolutely true.

You see, I am a “stewer.” When challenges pop up in my life, I like to go home and sit on it all day, chew it up in my head, play it and replay it, decide what I should have said, and just generally waste hours of my life making myself miserable. A combination of a mild dose of anxiety and an analytical personality don’t do me any favors. (One I get from my mom and the other from my dad–thanks, guys.)

So a few months ago, I decided to try something. Every time I found myself frustrated, discouraged, or upset, I would pause, and think to myself, “Let it go.” Sometimes I’d even picture the anxiety dissolving off the top of my head like a puff of steam. I’d unclench my jaw and my fists and release. I started to see that once you face a problem or a confrontation, or even someone unfairly taking out their own frustrations on you, there is no sense carrying it around with you all day. Stewing serves no one and solves nothing.

It reminds me of one of my favorite quotes, by the Buddha: “Holding on to anger is like grasping a hot coal with the intent of throwing it at someone else; you are the one who gets burned.” If you have a problem with someone, take it up with them. If you can’t or are unwilling to, let it go.

Another way to think of it is with what I like to call “The One-Year Test.”

A few years ago, at my first job out of grad school, I wrote a heated journal entry about one of my supervisors. I was so angry, and I wrote all about how I couldn’t believe that he did that. About a year or so later, I went back and read that journal. The emotion was tangible, but I only felt amused; for the life of me, I could not remember what it was that had made me so incensed.

It sounds so cliche, but it was an obvious reminder not to sweat the small stuff. After that, sometimes when I’d get frustrated or angry, I’d try to ask myself, “Will I remember why I’m mad in a year?” How about a month? Next week? If the answer is no, then let it go.

If you are morally opposed to modeling your mantra after a Walt Disney earworm, there is another song that I sometimes use as inspiration. But I’m not sure that you’ll like this one any better…

This song’s been out there for a hot second, and I’m noticing it getting a lot more play time on the radio. I like it for a couple of reasons. On the surface, it’s got a great beat. I love to turn it up for driving, running, and (imagine that) dancing.

But I also like it for what–or more aptly, who–it represents. It’s the story of that girl, who doesn’t have a care in the world, and doesn’t overthink things beyond that one moment in a club, telling a man, “Shut up and dance with me,” as he falls hopelessly in love.

I think every woman wishes she could be that girl, and every man wishes he could find her. The thing is, I don’t think she really exists outside of movies and books. But it’s fun to jam out to this song, and imagine you are her, if only for 3 minutes and 19 seconds at a time.

One of the best things that I saw this week was a video that was so simple yet so sweet. British musician Tom Fletcher (behind the sweet Wedding Speech and From Bump to Buzz videos) shared a great video of his son. The little one can’t stop cracking up, simply because his dad is blowing the seeds off of dandelions:

The laughter of little kids is just so infectious, and the way they find fascination in some of the tiniest things in life is a reminder to not take them for granted.

And while we’re on the subject of cuteness, I had to include an honorable mention… the too-cute, 8-week-old puppy who wants to attack his own hiccups!